Home Features “You need to have sex with Fifa officials”
Features 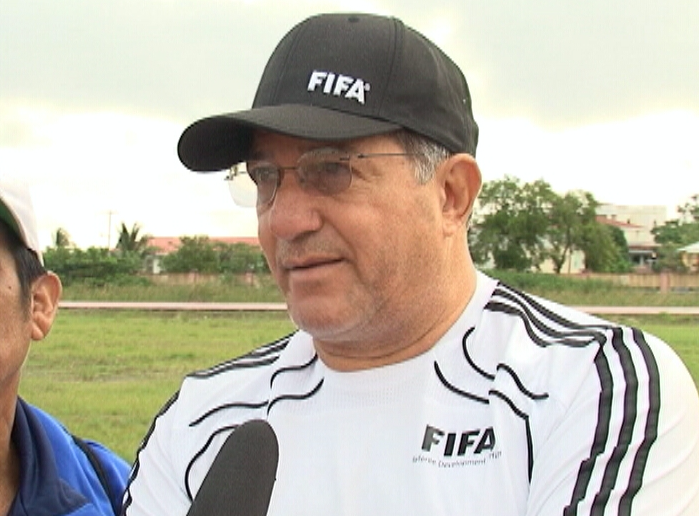 For more than a decade, officials from Concacaf and Fifa created a system where female referees had to give sexual favours in order to get international assignments.

Warned over a year ago with testimonies from some of the referees who had felt threatened to perform sexual acts in exchange for international refereeing assignments, Fifa didn’t suspend one of the most senior officials involved in this network: Ronald Gutiérrez, until recently Fifa’s director of development of referees. In January this year, he was removed. “They took this decision because they needed to renew their personnel with younger people,” Gutiérrez says to Josimar. “At no point, in any way, did they report to me that my name was involved in any investigation for anomalies when I held the position.”

Unlike Rodolfo Sibrian, the Fifa instructor from El Salvador, Ronald Gutiérrez has never been denounced publicly or legally for sexual harassement or sextortion. Nevertheless, his actions were brought to the attention of Fifa’s Ethics Committee by several Haitian individuals. “It was an open secret,” a former employee of Haïtian FA who doesn’t want his name to be public for safety reasons tells Josimar. He’s still living in Haïti. “And let me tell you, he wasn’t the only Fifa official to receive girls.”

A former international referee from Costa Rica, Gutiérrez officiated in World Cup qualification games during the nineties and at several Concacaf Gold Cup finals. After retiring in the 2000s, he served on the Concacaf Referees Committee, and most notably as Fifa’s director of development of referees, he has travelled all around Concacaf countries to build and help local federations. “I organised the classes solicited by the affiliated associations for the referees (men and women) in the area,” Gutiérrez tells Josimar. Gutiérrez went to every country in the region, including Haïti. “He came several times,” confirmed five Haïtian referees who spoke to Josimar. “He was a good friend of Rosnick Grant, the president of CONA (the referees committee in Haïti).”

After an investigation by The Guardian regarding sexual abuse scandals in Haïti, Rosnick Grant was temporary suspended and finally banned for life by Fifa in July 2021. An official statement from Fifa Ethics Committee at the time noted that “his conduct occurred between 2011 and 2021, and was related to sexual harassment and abuse, as well as threats and coercion (to prevent the reporting of such sexual abuse) towards female referees, and taking advantage of his position of authority in Haïtian football refereeing in exchange for sexual favours.” But Grant did more than abuse local female referees, he also ordered them to have sex with officials from Concacaf and Fifa, including his “good friend” Ronald Gutiérrez.

The supplier
The Haïtian FA president at the time, the all-powerful Yves Jean-Bart, was banned for life for sexual abuse, including of minors, by Fifa in November 2020 whereas two of his accomplices, Yvette Felix and Nella Joseph, were banned for five and ten years. Meanwhile other big names, like the former technical director, Wilner Etienne, have been accused of raping underage girls inside the Fifa Goal Centre of La-Croix-des-Bouquets, the Fifa-funded training centre close to the Haïtian capital Port-au-Prince. “We’re talking about decades of abuse,” Ernso Laurence, former captain of the national team and president of the Haïtian players’ union, tells Josimar. “It happened for twenty years with many accomplices inside and outside the federation run by Jean-Bart.”

Nella Joseph, a former supervisor at the Fifa Goal Centre, was one of the persons who convinced underage girls to have sex with Jean-Bart. She brought them to “the doctor”, as they called it. Many other employees of the Haïtian FA who were part of this culture still work for the federation. “Jean-Bart had his people bring him the girls,” a former employee tells Josimar. “Rosnick Grant also had the same system. Grant lived outside the centre. No one interfered with what he was doing. Jean-Bart abused one or two female referees. All the other female referees were at Grant’s disposal.”

If the methods of Jean-Bart and Grant were similar, there was a big difference between the two: jealousy. Jean-Bart wanted to keep almost all the girls, including from his own club, l’AS Tigresses, for himself. At the Fifa Goal Centre, Jean-Bart, known as “Dadou”, even banned some coaches and players for having an affair with a girl he liked. Grant, however, shared the female referees with officials from Concacaf and Fifa when they came to Haïti. “He’s a pimp,” several employees say without hesitation to Josimar. “He used the referees like prostitutes. He told them to join the officials in the hotel they stayed in.“

Accused of trying to arrange the killing of a radio journalist who talked about his antics, Rosnick Grant isn’t a man to cross and his orders were followed by several female referees, especially two of his favourite mistresses. Both became international referees even if they didn’t pass the required physical tests. “I remember it very clearly because she told us,” a Haïtian referee says. “She didn’t pass the physical test, but Ronald Gutiérrez called CONA personally. He asked her to be included after all.” Gutiérrez denies this, and assures he never “interfered in any way […]”

“It’s also clear that it was Mr Grant who ordered the referees to conduct the improper behaviour in your alleged statements. No referee mentioned in your investigation manifested that I solicited favours of any type. And it’s not viable because these kinds of contacts were never given to any female Haïtian referee. Concerning Mr Rosnick Grant, I knew him because he was the president of the referee commission in Haïti, but my relation with him was limited to professional activities,” Gutiérrez says.

Josimar can confirm that several referees were instructed by Rosnick Grant and his accomplices – notably Wesline Louis, a woman now serving as a board member of the new CONA – to have sex with Fifa officials like Ronald Gutiérrez. “Grant was making jokes about it,” two male referees say. “He was proud of it. With another Fifa official, he even told the girl to keep a relation with him in order to have leverage.”
As someone inside Fifa’s Referees Committee in Zurich told Josimar: “Grant was almost untouchable because he offered girls to so many instructors. If he talks, we’re done.”

Threesome watching Avatar
In 2010, Ronald Gutiérrez was in Guatemala supervising the Concacaf U20 Women’s Championship that also served as qualification for the World Cup in Germany later that year. “I officiated at this tournament,” recalls an international female referee from Concacaf. “I understand how the system worked there. It happened during the afternoon. I was speaking with another woman who whistled with me. She asked me to go to her room to watch a movie. I remember it was Avatar. When I opened the door, I saw Ronald Gutiérrez naked in the bed upon a referee from Panama. These two female referees told me to join. I refused and closed the door straight away.”

After the tournament, she received other sexual advances by several officials. “I’ve refused to date them or to have sex with them and look what happened,” she says. “I worked so hard to one day whistle at a World Cup game or at least a tournament in Europe. I made every sacrifice to pursue my dream but I didn’t make it in the end because I didn’t accept the rules. The rules for us are simple: you have to sleep with officials. That’s how you get promoted. Otherwise, it’s very complicated. A few of us obtained international qualifications by our own merits and after years of suffering.”

“Looking into the matter”
Ronald Gutiérrez denies any wrongdoing or any “sexual situations”. A spokesperson from Fifa told Josimar: “Regarding Mr Gutiérrez, we can also confirm that the independent Fifa Ethics Committee is also looking into the matter at the moment. Please understand that no further comment can be made at this stage.”

Gutiérrez is proud of his 15 years of service as a referee instructor and official.

“I feel satisfied with the work I have done. I did it with care, energy, enthusiasm with the optics of improving the refereeing quality in my Fifa-affiliated zone,” he tells Josimar.

Concacaf told Josimar that Ronald Gutiérrez hasn’t worked for them for over a year, though he went to Puerto Rico and Dominican Republic for official courses in 2021.

“In the case of this individual, he worked for Fifa as a Referee Development Officer and occasionally provided consulting services to the confederation’s referee department […] Concacaf is deeply concerned by these allegations. We will work closely with Fifa as part of any investigation process and will provide any support required. We want Concacaf refereeing and all aspects of our football to be safe and welcoming for all. We would encourage anyone with allegations or concerns to come forward and report them to Concacaf and Fifa. »

“You have to give sex to become a Fifa referee”