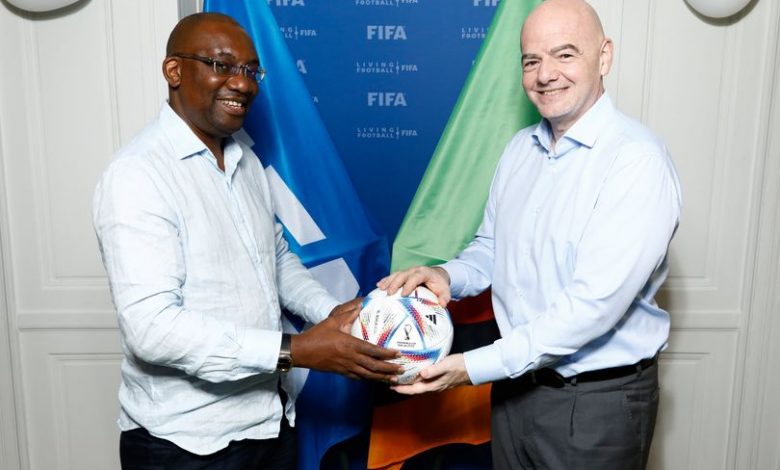 “There is something fundamentally wrong with the [Caf] administration”, says Andrew Kamanga, president of the Zambian FA, of the Fifa controlled African confederation.

Prior to the Caf general assembly which is taking place tomorrow on 10 August in Arusha, Tanzania, the Zambian FA put forward a proposal which, if endorsed by a majority of the confederation’s 54 member associations, would have guaranteed equal representation for all six zones of the continent at Caf ExCo and Fifa Council level, whilst saving millions of dollars for the cash-strapped organisation. Yet Caf secretary general Véron Mosengo-Omba, using a point of procedure, took this proposal off the AGM’s agenda. Zambian FA President Andrew Kamanga agreed to answer Josimar’s questions. As Gianni Infantino sees CAF and its 54 Member Associations as the foundation for his re-election at the top of Fifa in March of next year, any attempt at changing the status quo will be perceived as a rebellion which must be nipped in the bud.

Did you get any response from president Motsepe after you wrote to him protesting against the removal of your proposal from the general assembly’s agenda by Caf’s general secretary Véron Mosengo-Omba?
“We did…in the sense we received a circular from Mr Mosengo-Omba, which was sent to all Caf members, indicating that our proposal was deemed to have been defective and couldn’t be considered, because they had received legal opinion to that effect. But we maintain our position. We believe we have the right as members to submit any proposal for discussion. It’s up to the other members to act. We’ve put on the table something we think provides financial benefits as well as equity. The interest of the members should be to support our submission.”

Given the critical state of Caf’s finances, and given that your proposal would save Caf millions of dollars, how can it be that it will not even be discussed?
“In fact, our proposal is two-fold. The primary interest is to seek equity in ensuring that all six regions of Caf have equal representation at the Fifa Council, where Caf has got seven seats in total. At the moment, two of these regions have no representative on the Council. Our proposal would redress this imbalance. And then, we think we should have two representatives per region on Caf’s executive committee, plus the president, so a total of thirteen members. I don’t know why everyone seems to have glossed over the issue, which is to ensure equity for everyone in Caf. That’s number one. Now, number two: the potential savings you’d accrue for Caf if you were to reduce the executive committee from 25 to 13: basically, 6.5 million US dollars a year, so 25 million US dollars over the four years of the life of an executive committee. This saving would come to Caf as income, and would obviously go a long way in ensuring that football continues to develop, especially as we’re at a point where the financials are not strong enough and we’re not getting as much in terms of sponsorship to continue developing football in Africa.“

Have you had a chance to go through Caf’s new audited Financial Statements, and if yes, what did you think of them?
“I’m a chartered accountant and speak as one. All I can say is that when you have accounts which show a stressed situation, it brings into question what we call in accounts the ‘going concern argument’. Your future is not certain, based on what has been reported. These are issues which can be overtaken by securing new sponsors. The financials can improve in that regard, but we also have to be mindful of the potential for contingent liabilities, which are arising from the unresolved Lagardère issue.

“As long as you’ve got that Lagardère issue, it will obviously be hovering over the type of accounts that you’re going to produce. So first things first. Whether we like it or not, we have to resolve that issue, so we can look to the future with enthusiasm, not running the risk that you wake up tomorrow and you’ve got a claim against yourselves from Lagardère.”

Will this be discussed at the AGM?
“It’s up to the members. They have to decide where they want to see themselves in one year, two years, five years, based on where we are today.”

Is there a political dimension to Caf’s refusal to consider your proposal?
“The political dimension is very clear. It might be that there is an element of ‘self-preservation’ at work here, as there is an election coming in March 2023. You’re better off adding user-friendly members in the ExCo at that point. I can only speculate, but this, for me, would be the only reason!

This calls into question the role of the general secretary of Caf, Véron Mosengo-Omba, who is now openly criticised for his management of the organisation and, more generally, of African football.
“We, the Caf members, were asked in April by the general secretary to provide all our submissions by 12 May, which we did. At that point, we’d followed the due process. What should happen when the submission is given is that it should be taken to the executive committee and to the congress. Article 17.8 of the statutes allows the members to submit any matter for discussion. There’s no specifics as to what can and cannot be submitted. That is the members’ right. But, to our shock, in our case, we saw there was an attempt to remove our submission. Two agendas were produced, the second of which totally removed our proposal. We said ‘you have no right to do this, it’s up to the assembly to decide’. To this day, we have not received any acknowledgement that we wrote to them or that they received our submission. To our surprise (he laughs), what we received was a circular, directed to all of the members. It shouldn’t be like that. The general secretary has no mandate to evaluate, analyse or determine what should or should not go to the Congress. They even consulted internal and external counsels. For a straightforward matter like that, why should you go to internal and external counsels? This is where we felt that the general secretary, Mr Mosengo-Omba, had clearly overstepped his mandate, by presiding over our submission when it shouldn’t have been the case.

Is there a systemic problem with Caf’s administration, then? Many people say that Caf is now administered by Fifa. Would you agree with this?
“From where I stand, I don’t want to speculate. I want to be specific and factual. There is something fundamentally wrong with the administration. In the past, there was predictability. We never had these sorts of situations. The big question now is, why do we have them now when we have the new set-up, because these things have been mostly happening within the last year and a half. Obviously, this can be assigned to those who are in charge at the moment. We have been perceived to be troublesome, but we have no apologies to make for that. The very fact that they went out of their way to stop our proposal speaks volumes. I’ve got the proposal out in the open and am shocked it is not considered for whatever reasons. To stop it in the way it was stopped is quite…unfortunate.

One of the biggest topics for discussion at the AGM will be the African Super Football League. Is it not strange that a 200 million US dollars competition, which has yet to find a single backer, could be promoted when Caf is experiencing severe financial difficulties?
“The was a consultative meeting about the Super League in Cameroon in January. All the FA presidents were given an opportunity to speak, then the presidents of the clubs around Africa were also consulted. But we are now where we should be evaluating the implementation. And we’ve yet to see the financial model which will tell us how this League will be sponsored, who’s going to do that. At this stage, without this information, we are in no position to comment. We have to evaluate the risks and then see. Anything which helps the development of football on the continent we’re happy with. But of course, we need to manage our expectations and ensure that the league is solid enough, fully sponsored and underwritten – and better than the two existing Caf continental club competitions. Only when we see the financial structure of this new tournament will we be able to comment intelligently on it. So far, at the MA level, we haven’t seen which financial model is used to support the project.

No broadcasters have declared an interest in the tournament so far.
“That’s the real issue. Until the Lagardère issue is resolved, we won’t be able to see how we can get out of the woods, as they say. Whether we like it or not, we must resolve this, because it has a bearing on the going concern, from an accounting perspective. It is what it is.