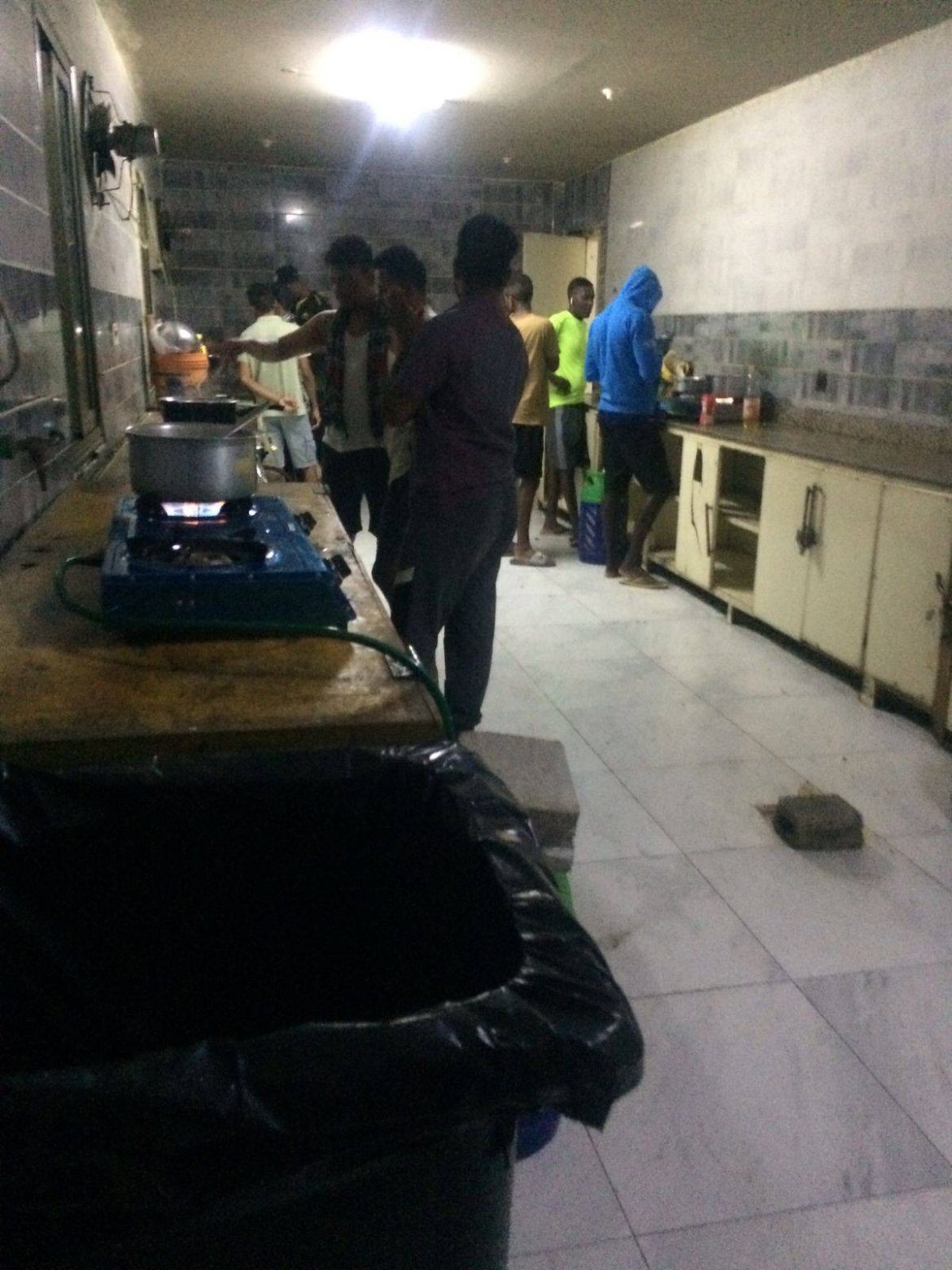 A company directly and heavily involved with the World Cup in Qatar, with thousands of employees, is blackmailing its workers.

The years-long information war about what’s really happening inside Qatar is escalating as the World Cup, the first in the Arab world, draws near. The UN labour organisation ILO, which has been overseeing the “reforms” since 2018 (ILO’s Doha-based operation is fully funded by the Qataris), the international trade union ITUC and FIFA, are among the organisations that have praised Qatar’s so-called reform process. And a string of World leaders have joined that choir, the German chancellor Olaf Scholz being the most recent, saying “Qatar has adopted numerous improvements in workers’ rights in recent years, in particular the abolition of the Kafala system and the introduction of a minimum wage. The legal situation of migrant workers has improved as a result.”

But as Wenzel Michalski, director of Human Rights Watch (HRW) in Germany, said:

«Instead of emphasising the supposed will to reform and the alleged achievements of Qatar, politicians and sports officials should address the human rights violations so that something really changes, not just on paper.”

Just like Human Rights Watch – Amnesty, MigrantRights and other human rights advocates – have documented that human rights abuses are still very much part of everyday life for the approximately two million migrant workers in the desert country.

One of them is David from Ghana. He works for a huge security company in Qatar that is directly involved with several World Cup projects, including stadiums and luxury resorts that will host teams that will participate in the tournament. David is a security guard at one of those resorts. Josimar knows the identity of both his employer and the resort, but despite the fact that his employer is violating the law that is held up as the key piece of evidence in Qatar’s progress narrative, we cannot name either for fear that David could be identified and face serious retaliations from his employer that could lead to his detention and deportation from Qatar.

David has been working at the World Cup resort for the last six months.

“There is a form of discrimination going on here,” David says. “You don’t get any food. Getting water is an issue. This is a five-star hotel. But I can go half a day without water. It makes you wonder – what kind of a hotel is it?”

David wants to leave his current employer to accept a new job, but he can’t.

Stay or pay
A few weeks ago, David was offered the chance to become an office assistant with a different employer. The incentives were a no-brainer: an eight-hour workday and the promise of a higher salary, 2500 riyals. It was a world away from the constant agony of his current assignment. David was on the brink of achieving the career growth he had dreamed of.

Proud and happy, David told his employer that he wanted to leave the company for a new role. The reply from a company director was brutal and above all unlawful. He wanted David to pay 4500 Qatari riyals (roughly 1250 euros) to obtain a No Objection Certificate (NOC), a steep sum for someone with a maximum monthly salary of 1800 riyals. The document, required by David’s prospective new employer, is no more than what it pretends to be: an employer’s statement that he does not object to an employee changing jobs.

Qatar, however, has abolished the need for a NOC. In 2021, the ILO wrote in a report: “These major changes to the sponsorship system remove the possibility for unscrupulous employers to keep workers under their control, and allow migrant workers to terminate employment with reasonable notice, and change employer or return home.”

This company, which employs thousands of migrant workers, harbours a culture of blackmail over NOCs, says David. The asking price is always between 4,000 to 5,000 riyals for a certificate.

“One guy got a job at Talabat [a delivery service] and although he paid the money for the NOC, the company delayed his process,” says David. “He ended up not getting the job.”

Another form of reprisal is ‘room to sleep’. The formula is simple: the worker is put on non-active duty and receives just a 300 riyal food allowance per month. He is confined to his room. “It is emotional torture,” says David. “Your mind is at home. How will I provide food for my family? How will the children go to school? Emotional stress can make you go mad. You think so much.”

The consequences and outcome of the reprisals can be deeply tragic. “A colleague committed suicide,” recalls David. “He first tried to burn himself, but other workers sensed the smoke coming from the room. The second time he wanted to throw himself from the balcony but he was monitored. The last time, he poisoned himself and this time he died. He was 28 years old.”

“Kafala seems to be alive and well”
The ILO and Qatari authorities claim that 240,000 workers have changed jobs since the need to obtain an NOC was supposedly abolished. This always seemed a gross exaggeration – if not outright distortion of the facts. The ILO has constantly failed to provide data to back up its claim.

“Based on what people are seeing on the ground in Qatar it appears that there was some early promise after the reform, but very quickly the stern opposition to the reform became evident and companies began to find ways to get around the reform,” says Nicholas McGeehan, Director of FairSquare. “It does not appear that the authorities complemented the legal reform with any concrete plan to sell it to local businesses and ensure its effective implementation. The consequence of this is that kafala seems to be alive and well in Qatar despite its abolition on paper.”

David’s predicament is a case in point. Not only did his employer prevent him from changing roles, but the NOC also became a tool of blackmail. David says the company retaliates against any worker who dares to complain to the ministry of labour. The ILO admits, through a spokesperson, that “there is a need to address the retaliation by some unscrupulous employers against workers who wish to change jobs.”

Heat stress
David arrived in Doha a couple of years ago, leaving his wife and infant behind. His experience of Qatar is a catalogue of misery, replete with all the labour abuses that the kafala system – which Qatar officially abolished in 2020 – enables: the endless working hours in the heat; the squalid, cramped accommodation where there is hardly space for everyone’s working outfit, cooking utensils and personal belongings.

“Working in the summer is a huge challenge,” says David. “One time I was working in a parking area. It was an open space and my skin turned too dark. The heat causes stress. My colleagues complained about severe pain. You check his back and he has heat-stress marks. You are standing for so long under the sun in 40-plus degrees celsius and you reach a stage where you feel the body is too tired.”

His work, commute and daily chores often take up 17-18 hours per day. It’s a gruelling routine that is repeated week after week after week. There is hardly ever a day off. There’s no let-up. Duty always calls.

Fifa standards
David is trapped by a NOC he should never have to pay for in the first place.

The 32 World Cup finalists were given a list of hotels and training centres by Fifa. In contracts, the world federation includes clauses that define the Fifa standards companies must comply with. They outline specific terms with respect to enforcement, such as audit and inspection, reporting, remediation as well as stakeholder engagement. This also applies to hotels and base camps hosting World Cup teams. They must also uphold the Supreme Committee for Delivery and Legacy’s Workers’ Welfare Standards.

“The new company has given me a three-week deadline to get a NOC, says David. My company might keep me pending for some time and then I lose my job opportunity. They need so many security guards, so much manpower because it is the World Cup,” David says.

The Supreme Committee wrote this in a statement:

The resort and the football association in question did not reply to Josimar’s questions for comment.

If you have any information that you think we should know about, please contact our reporter samindrakunti@protonmail.com