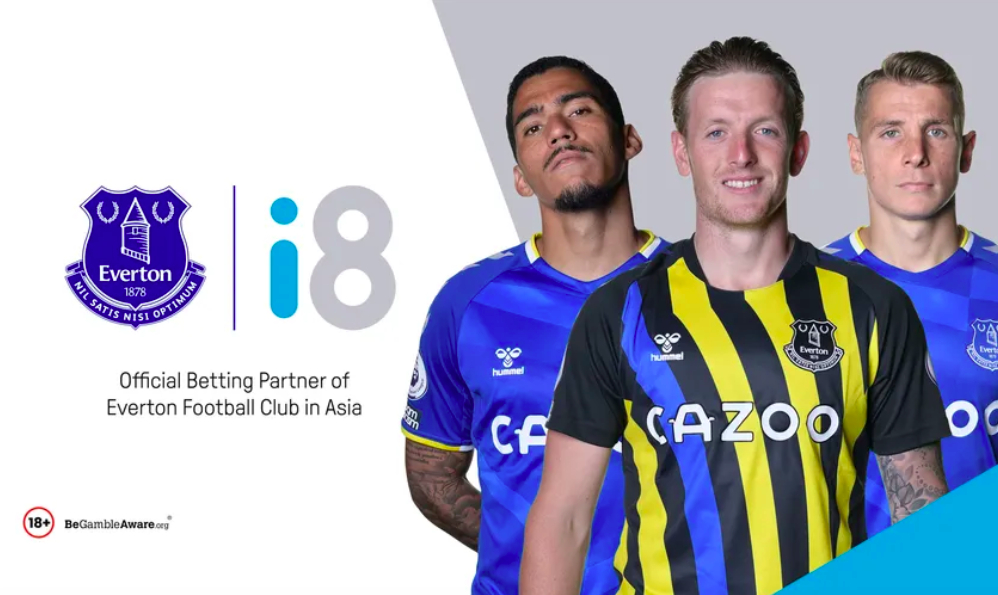 The links between Premier League clubs and mysterious Asian e-Gambling platforms keeps getting stronger. Everton recently announced i8.BET as the club’s new Asian betting partner. But who they are, what they actually do, no-one knows, aside from a handful of individuals who are neither seen, heard or scrutinised.

A new name appeared on the LED boards which run across all four stands of Goodison Park on the occasion of the last Merseyside derby: i8.BET.

A few hours earlier, on the very same day, Wednesday 1 December, Everton FC announced on its website that it had “further expanded its international partnership portfolio by signing up i8.BET as a new commercial partner”.

The statement read: “The deal will see i8.BET become the Club’s exclusive Official Betting Partner in Asia, as the gaming brand continues to expand its trusted and innovative platform in the online betting market across Asia and beyond”.

The news was barely shared outside of the specialist betting media, which satisfied themselves with publishing quotes from the original statement without adding detail or comment. No British newspaper or website of note thought it worthy of a mention.

This was understandable. This type of partnership is commonplace in the Premier League, where drawing money from opaque e-Gambling operators has long been accepted as a fait accompli, regardless of the inconvenient questions which could be raised about the problematic nature of these businesses. English football chose to look the other way, as legislators have done until now. When Josimar contacted eleven Premier League clubs about their existing, lucrative relationships with various online foreign bookmakers, only two, Wolves and Manchester United, replied to our enquiries, both of them telling us in substance: “no comment”.

That some of these operators, whose beneficial owners are unknown to all, the clubs they do deals with included, are probably complicit in money-laundering, labour-trafficking and other criminal activities is not speculation, but taken as fact by national and international law enforcement agencies (see Josimar’s 18-month long investigation into the matter, The trillion-dollar gambling game). Yet, despite recent talk of reforming the UK gambling laws, the links between elite English football and mysterious e-Gambling platforms is as strong as it’s ever been, and fresh deals are still being brokered, as was shown by Everton’s acquisition of a new ‘Official Asian Betting Partner’ (*).

Everton FC could be expected to be extra careful when choosing new betting partners.  SportPesa, a Kenyan bookmaker founded by exiled Bulgarian casino owner Guerassim Nikolov, had become their main sponsor in June 2017. The five-year deal, the biggest in the club’s history, worth an estimated 62.5 million US dollars, was supposed to run until June 2022, but the club had to cut its partnership short in February 2020. An investigation by The Guardian’s David Conn revealed that the company did not pay tax on the huge profits it made in the African country and beyond, and had its activities suspended by the Kenyan government in 2019. Nikolov was also suspected of credit card fraud on a massive scale, racketeering, and even, in a surreal twist, the hijacking of 14 trucks in Serbia. Interestingly, SportPesa had acquired its UK gambling licence through the services of TGP Europe Ltd, a company based in the Isle of Man which specialises in providing so-called ‘white label’ licences to foreign operators. It is a name we’ll come across again.

«Promotions in key brand territories»
So, what of i8.BET, the ‘trusted and innovative platform’ which is referred to in Everton’s statement?

A certain ‘Darren Wang’, Chief Marketing Officer of the club’s new Asian partner, is quoted in the same statement as saying: “In line with our global tagline of ‘Choose The Best’, we are excited to exclusively partner with such an iconic Premier League team as Everton Football Club; a partnership that will see us working with the club on a number of exciting and innovative initiatives and promotions in key brand territories in support of our ongoing brand expansion and trust building efforts.”

Josimar set out to find out what exactly this ‘ongoing brand expansion’ consisted of. The truth is that i8.BET has a long way to go before establishing its presence and ‘building trust’ on markets where – it bears repeating – gambling on sports is illegal. Why? Because, strictly speaking, i8.BET is not a bookmaker.

As is commonplace with other Asian e-Gambling platforms which have acquired ‘white label’ licences in Great Britain, visiting i8.BET’s UK website leads to a dead-end. It is not operational.

A question of time? Perhaps. But it should be remembered that, for Asian operators, the one real purpose of acquiring a UK licence is to use their virtual presence in Britain as a springboard for the genuine markets where they will make their money. Linking up with prestigious partners such as Everton FC and, by extension, the world’s most popular football league, the Premier League, is the most efficient way to promote the gambling brands at “home” – in China, Thailand, Indonesia, Malaysia – where advertising sportsbooks is just as illegal as placing bets on what they offer.

The story is quite different when avoiding geo-restriction and accessing i8.BET from Indonesia, Thailand, China and Malaysia, as Josimar has done.

These are just a few examples of the imagery used by all of i8.BET’s Asian websites, complete with the usual ‘suggestive’, borderline pornographic pictures of very young women, plus a photograph of male supermodel David Gandy lifted from an advertisement for Johnny Walker whisky for good measure. One thing is sure: i8.BET is not holding back on using Everton FC’s name and crest, or likenesses of its players.

The real problem, however, does not lie with these images, repulsive as they may be for many.

Josimar could find no mention whatsoever of i8.BET, its tagline ‘Choose the best’ or of its ‘Chief Marketing Officer’ Darren Wang anywhere on the web prior to the announcement of the bookmaker’s deal with Everton on 1 December, even when using search engines from countries where the brand is supposed to be present. It was as if i8.BET had been created ex nihilo.

The domain name itself is the property of a Chinese national named Lin Yunfei, domiciled in Zhengzhou, who has registered hundreds of other names, but about whom no other details can be found. As to the brand itself, which claims to hold a Filipino licence on its Malaysian website, no company of that name can be found on the official Filipino registry of licensed gambling operators, which suggests that either i8.BET is the avatar of another company, or was only registered very recently, if one sets aside the possibility that it does not even exist.

Josimar tried to register as a client and place an actual bet on the Malaysian, Thai and Chinese versions of the i8.BET website. What happened then was highly unusual – and suspect: we were not taken to a dedicated, unique sportsbook as expected, but redirected to other e-Gambling websites, namely those of M8BET, MAXBET, NOVA88 and SBOBET. 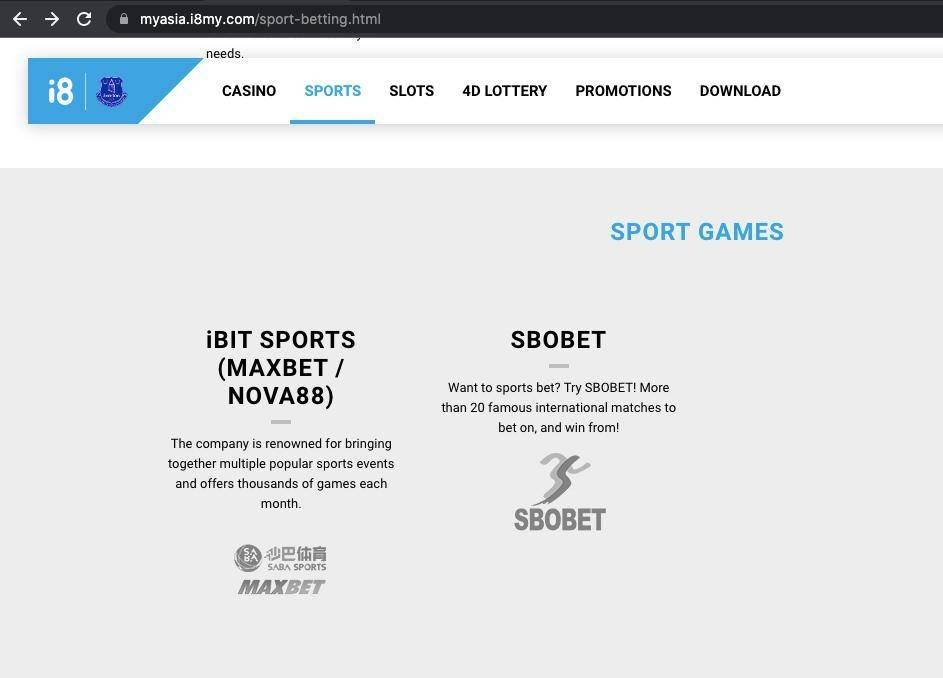 Due diligence?
In other words, it was impossible to place a bet on i8.BET itself, which appears to be nothing but an agent for other bookmakers; yet, to place that bet with SBOBET or any of the other promoted brands, the customer first had to register with i8.BET, which raised the question: could this be a way to harvest personal data from customers? Does i8.BET actually exist? Is there even really someone called ‘Darren Wang’? And is Everton FC aware of all this?

What is more, none of the bookmakers which i8.BET is a portal to is licensed in the UK. This means that the UK Gambling Commission, by granting the i8.BET brand a licence, has enabled unregulated operators to benefit, at least indirectly, from its stamp of approval.

Josimar approached Everton FC with a list of detailed questions, and asked the club to provide contact details for their new partners, since, apart from a ‘chat’ function for customers, none of these details appear anywhere on any of the various Asian versions of the i8.BET website. No response was forthcoming.

Josimar also contacted the UK Gambling Commission, which replied: “We do not talk about individual operators or cases”, referred us to its online registry of licensed companies, and told us, that “Where an operator contracts with a third party, we expect the operators that we licence to carry out all necessary due diligence to satisfy themselves that the proposed relationship will not in any way compromise the operator’s own compliance.”

The operator in question is TGP Europe Ltd – the very same Isle of Man company which acquired a UK licence for Everton FC’s previous – and disgraced – betting partner SportPesa, and has done the same for a number of e-Gambling sponsors of English football clubs, including FUN88 (Newcastle), SBOTOP (Leeds United, which has direct links with SBOBET, one of the websites i8.BET redirects to), Yabo (formerly associated with Manchester United) and a number of others.

Josimar contacted TGP Europe Ltd and put a number of questions to the Douglas-based company, namely:

Would you be able to provide Josimar with a point of contact with i8.bet and, in particular, Mr Darren Wang, its Chief Marketing Officer, who is quoted in Everton FC’s press release?

When do you expect i8.bet to start operating in the UK?

is i8.bet a genuine e-Gambling platform, or does it act as an agent for other Asian bookmakers?

As regards TGP Europe Ltd and its parent company TGP Holdings Ltd, is it correct, as has been mentioned in numerous media reports, that it was originally founded and is ultimately owned by the Macau-based group SunCity?

The last of these questions was of particular interest, as the billionaire owner of the SunCity group, Alvin Chau (pictured below), was arrested along with ten other individuals by Chinese authorities in late November, under suspicion of being part of a criminal gang and of “establishing gambling platforms overseas and soliciting residents in mainland China to engage in illicit gambling activities online”, to quote Chong Kam Leong, a spokesman for Macau’s Judiciary Police (*). According to media reports, the individuals who were arrested admitted “establishing overseas gambling platforms and conducting illegal virtual betting activities” in China. 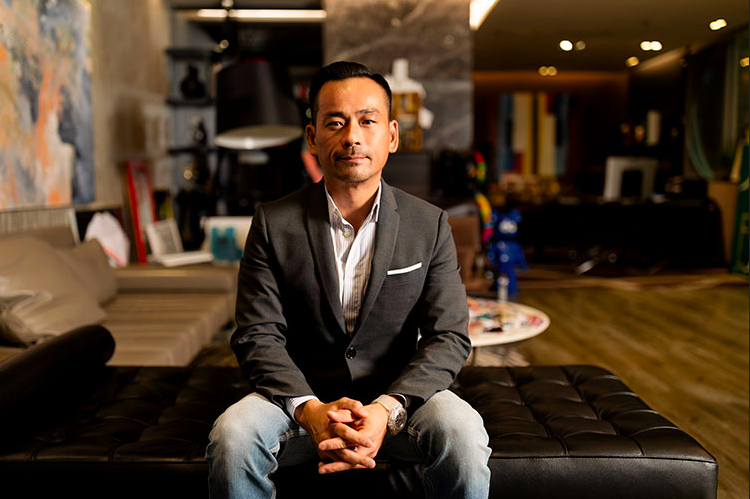 TGP Europe did not respond to our questions.

And on this Monday night, as Everton welcomes Arsenal in its grand old stadium for the 15th round of the Premier League campaign, the name and the promotional messages of i8.BET will be shown to hundreds of millions of spectators across the globe. Who they are, what they actually do, who might be hiding behind them, no-one knows, aside from a handful of individuals who are neither seen nor heard, nor scrutinised. What kind of due diligence process, if any, was conducted before TGP, the UK Gambling Commission and Everton welcomed the newcomer is anyone’s guess.

(*) Everton FC already had two ‘official betting partners’: Cyprus-based Parimatch, also a partner of Juventus and Leicester City, which signed a two-year deal with the club in September 2020, and operates primarily in Eastern Europe; and Rushbet.co, a partner since December 2020, which is active in Colombia.

(*) SunCity shares plunged by 10% when the arrests were announced.