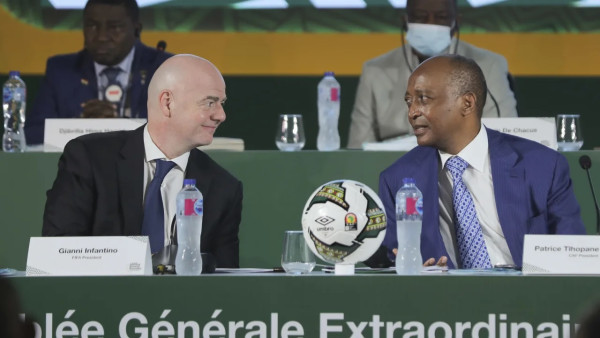 A small Togolese TV network, NWTV, acquired the rights to the 2022 World Cup for 19 African nations, beating long-established rivals in the bidding. How did they manage to get the funds to accomplish this miracle? Information received by Josimar suggests that the miracle-maker was none other than Caf president and close Infantino ally Patrice Motsepe.

The announcement made by Fifa on 26 July 2021 should have remained a footnote at the bottom of a report aimed at broadcasting professionals, nothing more. The governing body had granted the regional pay-TV rights to the 2022 Men’s World Cup and the 2023 Women’s World Cup, as well as the rights to some of its lesser competitions, to a Togolese network called New World TV, or NWTV for short. NWTV would be Fifa’s exclusive pay-TV partner for the nineteen countries of the so-called ‘French-speaking sub-Saharan region’ (*). Another day, another deal – so what?

Yet, questions were raised within the industry from the outset, as there seemed to be something quasi-miraculous about NWTV’s triumph. Something incomprehensible, even.

The Miracle
For how could a previously unknown company, with zero experience of broadcasting major sports events, no international structure and apparently very modest means, be preferred to competitors – IMG, Infront and Canal +, to name but three – who could all boast of a long and successful track records in that region, and whose financial muscle could not be doubted?

Why would and how could a local TV network with an exclusively local audience – and Togo’s population is only 8.6 million inhabitants – suddenly aim for a market that had been out of its reach until then? Mutatis mutandis, as an insider put it to Josimar, it was as if a corner shop had taken on neighbouring supermarkets in a bidding war to become the area’s main distributor and had won.

And the 8 million dollar question: where did NWTV find the money to back their bid?

The first of these questions could be met with a powerful answer. As some of the people Josimar spoke to in the course of this investigation argued, NWTV’s small size and lack of experience were not insurmountable obstacles in themselves. By picking a local operator ahead of European-controlled companies, they said, Fifa had ‘made the choice of Africa’; Fifa had empowered a part of the world which still felt the undue influence of former colonial powers and wanted to shake it off. What could be wrong with that?

The other two questions were rather more difficult to provide satisfactory answers for. The exact number of active subscribers to NWTV’s almost exclusively news-driven content is difficult to ascertain. Some business sources claim that it hovers around the 30,000 mark; others claim it could be as few as 15,000. NWTV themselves, whilst not giving precise subscription figures, say that their accumulated monthly audience amounts to 565,000 unique viewers. There is no ready means to check those numbers independently; but what is clear is that NWTV’s reach cannot compare with that of rivals such as Canal + Afrique, who boast about over 4 million subscribers in the region.  Fifa took a huge, unprecedented gamble if its intention was to ensure that its 2022 World Cup would reach as many homes in French-speaking sub-Saharan as possible.

Show Me The Money!
This raises the central issue of NWTV’s ability to raise the money needed to bid for those rights and, if successful, to pay the estimated 15 million US dollars those rights are said to have cost (*); as NWTV didn’t have this money.

The Togolese network currently offers five packages to its customers, whose prices range from 1,500 to 15,000 West African Francs (their ‘King’ option) per month, that is to say from 2,5 to 25 dollars.

According to Josimar sources, the bank guarantee which the would-be broadcasters had to provide Fifa with to enter the bidding process for its pay-TV World Cup rights in the region was 8 million US dollars, close to 5 billion West African Francs – the equivalent of 330,000 subscribers paying the most expensive package offered by NWTV. The Togolese network was clearly incapable of financing the deal by itself.

This led some in the region to suggest that NWTV’s bid had been supported by the Togolese president, Faure Gnassingbé, whose family has governed the country since a coup staged in April 1967. Others went as far as saying that the Gnassingbé family was the ultimate owner of the network. These assertions were denied by associates of NWTV’s director-general Kolani Nimonka when they were put to them by The Africa Report magazine last May. “There is no public money at all in New World TV”, they insisted.

So where did the funds come from? And how was NWTV able to strike another major coup in March 2022, when they secured the rights to a number of UEFA’s international competitions – including Euro 2024 – in the face of similar competition? The outlay far exceeded the company’s resources. Someone had had to step in to enable the minuscule company to honour its commitments.

The Broker
NWTV had called on the services of a familiar figure in the landscape of broadcasting in French-speaking Africa: Rome-based French national Richard Dimosi Diasolwa, whose own company, Media Business Solutions (MBS), has, in the space of eight years, become a significant actor in the region, striking deals with, among others, La Liga, Ligue 1, UEFA and Fifa. MBS, however, is not a broadcaster, but an agency which acquires rights and then sells them on.

When approached by Josimar, Mr Dimosi told us that, “First and foremost, MBS as well as Richard Dimosi Diasolwa personnaly (sic) have acted at all times on behalf of New World TV: there was never any flow of money nor consultancy agreement between FIFA, and MBS nor Mr Dimosi Diasolwa [and] second, the rights have been acquired through a media rights tender process which was run in the most transparent way as per international best practice.”

“Last and more importantly”, Mr Dimosi went on, “concerning New World TV’s project and objectives, I can only tell you that this is an extremely ambitious project, built by Africans for Africans, promising to watch the best sports competitions at the most affordable price. Would media rights tenders be reserved to European companies only? This is a very strange view of the competition”.

When asked about the particulars of the NWTV deal, Mr Diwosi said that, as he was “bound by an obligation of confidentiality towards FIFA”, Josimar should address “any and all relevant questions to Fifa should [they] want more details”. Josimar did, and received the following reply: “The agreement with New World TV followed the standard compliance process,” and that was that. A follow-up list of detailed questions was sent but has been left unanswered by Fifa so far.

The main interrogation remained. Regardless of Richard Dimosi’s extensive contacts and skill at playing the market, it was not MBS which had provided NWTV with the means to succeed in their bid for the World Cup rights. It was someone else. Dimosi had been a facilitator, nothing more.

In The Shadow Of The President
This ‘someone’, Josimar has learnt, was the Burkina Faso-based Coris Bank International, who stepped in to loan the 8 million dollars needed to enter the bidding for the Fifa rights. So far, so good: Ecobank is an established, trusted banking organisation; but NWTV could only borrow such a huge sum from Ecobank if they, in turn, could call on a guarantor for their loan. Their own assets were insufficient for that purpose. Whoever that guarantor was must provide the backing for NWTV’s bold enterprise.

According to information received by Josimar, this guarantor was a South African company, Sanlam, a financial services group which is also the largest insurance company in Africa.

Sanlam’s largest shareholder is a South African investment fund called Ubuntu-Botho Investments (UBI). And who is UBI’s majority shareholder? None other than CAF president and Gianni Infantino ally Patrice Motsepe, who holds 55 percent of its shares.

It is not by chance that Sanlam is often referred to in South Africa as ‘Motespe’s Sanlam’ (*) and always appears in the list of assets held by the mining multi-billionaire drawn by business publications when they profile the CAF president (*).

This meant that NWTV had been able to bid for and acquire the rights to Fifa competitions, including the 2022 World Cup, thanks to the indirect financial backing of a company whose links to the most powerful man in African football are a matter of record.

Josimar contacted NWTV and Sanlam to confirm the information we had received. No response has been forthcoming from either. Questions were also put to Mr Motsepe, which have also yet to produce an answer.

The silence which has greeted Josimar’s enquiries can only leave us with other interrogations. Did the CAF President intervene personally to make sure that NWTV, a company with no experience, a very limited audience and almost no resources of its own, could bid for – and win – broadcasting rights for the world’s number one global tournament?

If so, did this not constitute a clear conflict of interest? And how could Fifa sanction such a deal?

As to NWTV, proud rights-holders of Fifa – and UEFA – competitions broadcasting rights, the future looks bright, that is: provided they find partners to improve on their current offer.

The first test of their capacity to broadcast a major competition throughout the region, beyond the boundaries of Togo, came when the UEFA Nations League kicked off at the beginning of this month. France, the title holder and world champion, were hosting Denmark, a game which was bound to attract a great deal of interest in French-speaking Africa. Unfortunately for those who lived outside of Togo, images of that match proved elusive. NWTV had failed to put the necessary partnerships in place in time. Other miracles might need to happen before the World Cup starts next November.

(*) Neither Fifa nor NWTV have responded to Josimar’s request for an exact figure.

(*) For an overview of Patrice Motsepe’s business empire, see: https://mybroadband.co.za/news/business/407384-all-the-companies-patrice-motsepe-owns.html and https://mg.co.za/article/2019-05-03-00-patrices-rainbow-empire/