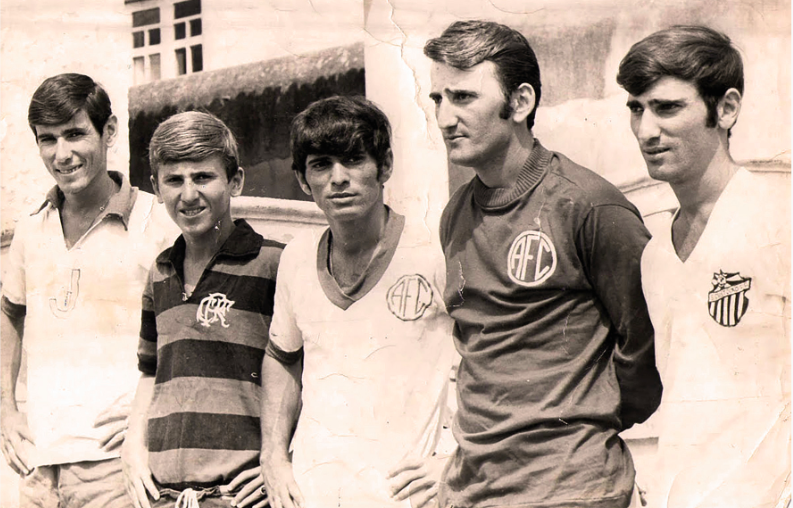 Zico’s older brother Nando was also a talented footballer. He was tortured by the military regime in Brazil and gave up his own career so his younger brother could flourish.

Torture tells more truths than any confession under torture. The statement is by the Paraguayan writer Augusto Roa Bastos. And indeed, during the military government in Brazil between 1964 and 1985, it was these practices adopted by a system of repression that exposed the true nature of a criminal regime which, half a century later, has never been punished.

Torture also tells in part the story of Brazilian football, which at its height was used to mask the brutality of a regime that left hundreds dead and promoted forced disappearances. For the generals, Pelé with his shirt of the colour of the sun was the perfect light that tried to blind the critics abroad against a government that, for years, censored and killed.

Far from the glory of the Brazilian team in the late 60s and early 70s, a player felt, body and soul, what torture meant. He was Fernando Antunes Coimbra, one of Zico’s older brothers.

Nando, as he was known, started at Fluminense. But his best moment occurred when playing for Ceará. He caught the attention of foreign clubs and Nando opted for the Portuguese club Belenenses in 1968.

But the dream trip abroad, instead of creating a platform to show Nando’s skills, instead became the ending of his career.

Dark times
Unbeknown to him, his moves were being monitored by the repressive agencies of the dictatorship. In addition to being a player, Nando had been a student of philosophy and split his time between the pitch and acting as a teacher for the National Literacy Plan (PNA). The project, which aimed to reduce the high rates of illiteracy in Brazil, was abandoned by the military regime and the teachers were persecuted. Teaching reading, therefore, became a sign of subversion. And Nando was one of them.

In fact, the military knew the “danger” that a literate people could represent. Under Brazilian law at that time, only citizens who knew how to read could vote.

In a statement to the Truth Commission of São Paulo, the professor of the Federal University of Triângulo Mineiro, Wagner da Silva Teixeira, revealed how the plan was to literate five million Brazilians. “Obviously this has scared the more conservative sections of society. What would be the impact of the 1965 presidential election, with five million more voters, which would raise voters from 12 million to 17 million?” asked Teixeira.

While the project was cancelled, social movements that carried out literacy program,es were repressed, under the justification of the regime that they were indoctrinating the population with communist ideas.

The subversive work of teaching was not Nando’s only problem. In his family there were still other members considered subversives. One of them was Cecilia Coimbra, his cousin and member of the Revolutionary Movement Eight of October, one of the organised groups of resistance.

In 2013, Cecilia gave her testimony to the Truth Commission. “Any person and movement who dared to raise their voices would be silenced and massacred: it was state terrorism that strengthened itself,” he said.

The torture
She confirmed her relationship to militant resistance groups. In 1969, Cecília hosted at her home some of the people who participated in the kidnapping of the American ambassador Charles Elbrick. Soon after, she would be arrested.

Cecília recalled how, as soon as she arrived at the police station, intimidation began. “Tell me, you communist whore, how many did you fuck?” From there, she would spend three months incommunicado, without a single sunbath or any other type of exercise. It was a “trip to hell.” “To speak of this is to speak about the lack of physical and mental torments, of feelings of helplessness, loneliness, fear, panic, abandonment, despair; it is to speak of the ‘separation of body and mind’.”

Torture sessions multiplied. “Torture does not want to make you talk, it aims to silence and this is the terrible situation: through pain, humiliation and degradation, they try to transform us into something, into an object,” she said. “To resist this is a huge and gigantic effort not to lose our lucidity, not to allow the torturer to penetrate our soul, our spirit, our intelligence,” she said.

On one of the sleepless nights, she says she had her clothes torn and her body wet. “Wires were placed and I felt the electric shocks: in the beak of the breasts, vagina, mouth, ear and throughout the body,” she said. Sexually abused, she further reported that another occasion was taken in the middle of the night to the prison courtyard. “They said that I was going to be executed,” she said. … “I believed …that moment I died a little“.

A brief stay in Portugal
Cecilia would survive. But Nando’s fate in football did not. In Portugal, it did not take long before Zico’s brother was deported back to Brazil. His departure from the club did not occur because of a disagreement with the coach. But it was the result of direct intervention by the police force of Salazar, the Portuguese dictator.

He spent only two months in Lisbon. But enough time for Nando to be close to another “foreigner”: the Mozambican Eusébio da Silva Ferreira. Both, in a certain way, were targets of Salazar. The Portuguese dictator did not let Eusebio leave the country to play in a foreign club. To prevent his transfer, the government forced him into military service.

Nando, on several occasions, accompanied Eusebio to sign his presence in the Army, a way to ensure that he stayed in the country.

Nando returned to Brazil, never talking about what had happened to him. But he would find that his return would not end the ordeal. Nando was arrested by the Department of Order and Social Policy (DOPS) and kept in the basements of a building in Rio de Janeiro for almost a week.

His fate might have been similar to his cousin’s, had it not been for the magic of football in Brazil. One of the colonels in Rio de Janeiro, Homem de Carvalho, was a fanatic fan of America, the team where another brother of Zico, Edu, was the big star.

Even with Nando freed, his brothers chose to keep him away from his home for a few days. Disfigured, the player was first taken to another house to recover and, later on, to find his family again.

Nando, shortly afterwards, gave up his football career as a way to protect a boy who, already at that moment, was beginning to gain prominence in the lower categories of Flamengo: Zico.

The coup that never happened?
He has no doubt that the persecution he suffered ended up hitting another brother in the Coimbra family. Edu, in 1969, was the top scorer of the national championship and voted the best player of the year in Latin America. Even so, he was not called up to the Brazilian team that would play the 1970 World Cup.

In those years, repression, football and propaganda mingled. In charge of the team of Pelé and Tostão was the journalist João Saldanha. In one of the pre-World Cup trips to Mexico for the draw, the coach handed over to the foreign authorities a dossier he had prepared showing more than 3,000 political prisoners and dead in Brazil.

The tension between Saldanha and President Emilio Garrastazu Médici was growing. But what made the situation unsustainable was the general’s insistence on asking the striker Dario to be called up for the World Cup. The coach gave an answer that displeased the regime. “I do not choose the ministry, nor does the president choose the team,” Saldanha said in an interview.

Three months later and on the eve of the World Cup, he was fired by pressure from the generals. The team that went to Mexico was headed by Major-Brigadier Jerônimo Bastos, while the chief of security was Major Roberto Ipiranga Guaranys, who is on the regime’s list of torturers. Mario Lobo Zagallo, took the role of coach and returned from Mexico with the Jules Rimet trophy.

Immediately, the generals began to use the victory on the pitch as a kind of sign of their legitimacy. “At a time when the Seleção wins the World Cup, after a memorable campaign, I wish everyone to see in the president of the Republic a Brazilian who is equal to all Brazilians,” said Médici. “I identify in the victory the prevalence of principles that we should arm for the struggle for national development itself,” he said.

Nando does not understand how, today, the feeling of nostalgia towards the military regime is popular in the country. Brazil just saw the arrival of Jair Bolsonaro, in a government composed by seven generals in its highest positions.

Pelé and propaganda
Over the years, Bolsonaro has voiced support for torture and insisted that the military coup in Brazil in 1964 never occurred. After being elected president, the far-right politician went to the Palmeiras stadium in Sao Paulo and received, from the players’ hands, the trophy given to them as Brazilian champions of 2018.

In the 70’s, few were the stars capable of questioning the regime. In 1972, in an interview with the Uruguayan newspaper La Opinión, Pelé said: “There is no dictatorship in Brazil. Brazil is a liberal country, a land of happiness. We are a free people. Our leaders know what is best for us and govern us with tolerance and patriotism.”

Zico, despite having scored in the 1972 Olympic qualifiers, was not called up for the Munich games. And Nando knew that he, in part, was responsible.

His only way out to preserve his younger brother was to abandon football and keep the persecution he had endured for himself. If it hadn’t been for his silence, the world may have never have known the genius, the elegance and the integrity of the boy from Flamengo.

*Jamil Chade is a writer and took part as a researcher of the National Truth Commission created by the government of Brazil to investigate the crimes committed by the dictatorship.

Dirty John: The dark side of Rui Pinto