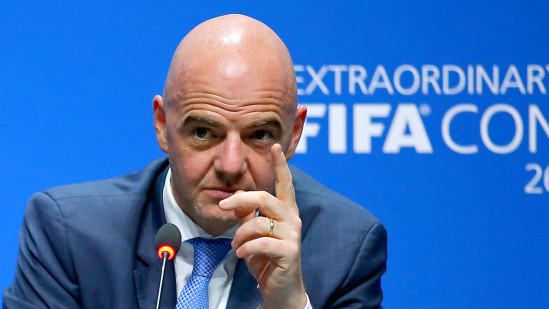 The newly appointed chairwoman of the ethics committee, María Claudia Rojas, made her first public statement yesterday – and started off with a blatant lie. That’s good news for FIFA President Gianni Infantino, but bad news for everyone who cares about football.
By Pål Ødegård (paalpot75@protonmail.com) and Håvard Melnæs (lucatoni@protonmail.com)
After both chairmen of the ethics committee were controversially replaced at the FIFA congress in Bahrain last month, a move FIFA Council member, the German FA President Reinhard Grindel, says was a decision made by Gianni Infantino himself, there have been low expectations of any statements from this independent committee on any verdicts or investigations for the foreseeable future.
Since Infantino became FIFA President last year, he has removed every major player in the game of football politics that opposed or challenged him. The Swiss promised reforms, instead he is acting more and more like an autocrat.
The former chairman of the committee’s investigatory chamber, Cornel Borbély, said at an improvised press conference in Bahrain that “hundreds of cases would now be on hold”, cases that would be “stalled for years”. He added that it “was a huge setback in the fight against corruption,” while also pointing out that “you have to develop this practice, this knowhow. It’s a question how long it takes for the new chamber to investigate these cases to the level that will bring success.”
It was therefore a surprising move that FIFA yesterday published a statement regarding reports that FIFA president Gianni Infantino was under investigation. The statement reads as follows:
“Today, Ms María Claudia Rojas, the current chairwoman of the investigatory chamber of the ethics committee, has confirmed that all files have been handed over to her and that there are no open preliminary or formal investigation proceedings involving the FIFA President.
It is in FIFA’s interest that the work of the ethics committee is not disrupted by conjecture of any kind. Therefore, FIFA will refrain from commenting any further on baseless speculation and will instead concentrate on providing concrete information.”
As this magazine reported after the elections in Ethiopia in March this year, both Infantino and the FIFA Secretary General Fatma Samoura were actively involved in influencing the outcome. And they succeeded, their preferred candidate, Ahmad Ahmad from Madagascar, replaced the veteran Issa Hayatou as the President of CAF. This is a clear violation of FIFA regulations, which state that FIFA cannot influence elections held by its member confederations.
A story by Der Spiegel in late April then claimed that the FIFA President was the subject of a preliminary investigation by the ethics committee for his meddling in the CAF election. The article also claimed several African officials had been contacted by Cornel Borbély, the then chairman of the ethics committee’s investigatory chamber, to give statements on what really happened during the CAF elections. This magazine reported the last month that Infantino fired those who investigated him because they investigated him.
And three days ago The Guardian also ran a story claiming Infantino was not only under investigation for interference in the CAF elections, but was also being investigated in separate case. A FIFA spokesperson told The Guardian that “we can confirm that both chairpersons are fully onboard with the activities of the committee and therefore it is operational and work is ongoing,” the spokesperson said. “The new chairpersons met at the end of May in Zurich and a transition plan was laid down and is currently under implementation.”
In yesterday’s statement from FIFA, the new chairwoman of the ethics committee’s investigatory chamber claimed that none of the files includes Gianni Infantino as the subject of any form of investigation.
According to information provided to Josimar, however, no handovers have been given by the former chairmen to the new ones.
Is Maria Claudia Rojas, the newly installed chairwoman of the investigatory chamber of the ethics committee, telling the truth, both considering she’s had a very short time to review what is said to be hundreds of ongoing cases and considering that FIFA’s ethics code is uncharted waters for her? Who had access to the files on ongoing cases in the timeframe between Borbély’s departure and Rojas’ first opportunity to look at them? This magazine has reliable information that the ethics committee received complaints about manipulation by the FIFA President in the election of a regional confederation and was well into the preliminary investigation. If Rojas can’t find the files, where did they go?
Was her integrity shattered already before she formally took upon her new role at FIFA? Ms Rojas has admitted that Gianni Infantino twice talked to her privately before the Bahrain congress.
Another worry is the increasingly blurry line between the supposedly independent ethics committee and the FIFA administration. The former chairmen had an external public relations firm to draft their statements. Yesterday’s press release came from FIFA itself.
It has also been custom for the ethics committee not to comment at all whether an individual is under a preliminary investigation, as it would be a violation of their own code to do so. But Ms Rojas had no such reservations, it seems.
Josimar have sent FIFA several questions, but not yet received any answers. Cornel Borbély, through his former spokesman, declined to comment.