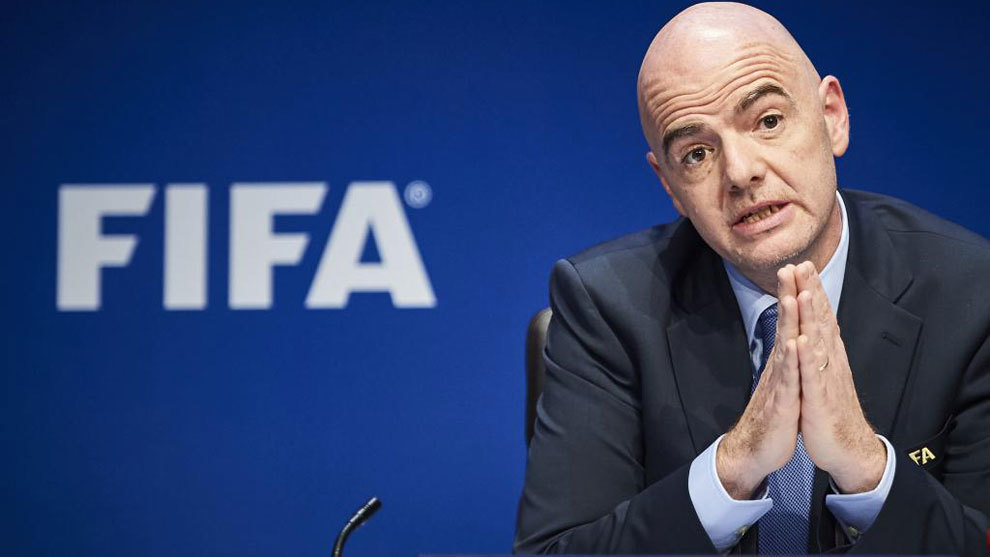 “FIFA’s claim that it remains neutral in matters of politics (within the sport) is demonstrated to be patently false”, said Justice Carol Gobin. Her ruling could seriously damage FIFA’s governance model and authority.

It was widely expected that Trinidad & Tobago’s High Court, the Caribbean country’s supreme legal body, would find in favour of its suspended FA in the case it brought against FIFA, which Josimar has been covering in detail over the past seven months. So it did.

What no-one could suspect was that the 22-page judgment that Justice Carol Gobin delivered on Tuesday 13 October would be as scathing as it proved to be. In tone as in substance, FIFA had never been subjected to such an unequivocally critical (and potentially damaging, as we’ll see) judgment in a court of law.

Justice Gobin did not mince her words. She adjudged FIFA to have made “a mockery of the proceedings”. The normalisation order FIFA’s GenSec Fatma Samoura had issued in March, less than four months after the new TTFA board had been democratically elected, had “an oblique motive”, she said, and was “improper and made in bad faith”. “The timing of removal of the new board after the troubling financial management had been allowed to continue and fester even with FIFA’s annual audits and oversight makes [FIFA’s chief Member Associations Officer] Veron Mosengo-Omba’s claim that FIFA held its hand until after November elections to allow an opportunity for the incoming Board to address the serious issues even less credible”.

Then came the frontal blow. “The conclusion that [the normalisation order] was a contrivance to subvert the outcome of the [TTFA] November 24th elections [our italics] is in my view inescapable”, she wrote. “FIFA’s claim that it remains neutral in matters of politics (within the sport) is demonstrated to be patently false”.

This was a key conclusion for the suspended TTFA board, which had maintained all along that it had been singled out by FIFA for punishment, not because of the irregularities in its financial accounts (of which it was fully aware, and actually had made its first job to address), but because it had gained power at the expense of David John-Williams, a key ally of Gianni Infantino in the region (*), whom the FIFA president had openly supported days before he was defeated in the TTFA presidential elections.

FIFA to escape the consequences
Justice Gobin then took a broader swipe at FIFA’s loftiest claims. “Throughout the proceedings”, she went on, “FIFA has […] demonstrated a disregard for the rule of law”. Its conduct “regrettably [called] into question the sincerity of its vaunted commitment to achieving its objectives to promote integrity, fair play and friendly relations in society for humanitarian objectives, as well as its commitment to respecting internationally recognised human rights and striving to protect them. Disregard for the rule of law is inconsistent with these objectives”.

These comments, harsh as they are, are not what will make FIFA hurt the most. After all, the federation of federations did not see fit to present a defence at the trial, as this would have constituted a de facto recognition of the T&T tribunal’s jurisdiction in a matter for which FIFA maintains that CAS is the only legitimate ultimate arbiter. Justice Gobin conceded that, “while it remained ensconced in its home in Zurich”, FIFA would “probably manage to escape the consequences of its unlawful behaviour” – as her court’s reach did not extend that far.

This, however, does not mean that FIFA can simply go on and ignore the decision of a tribunal whose authority it does not consider fit to adjudicate in this matter. International media, perhaps daunted by the complexity of the dossier, have mostly stayed away from this story, but others – specifically member associations in the region and elsewhere, as well as experts in sports law – have kept a keen eye on how the dispute developed over the past seven months.

First, there had been surprise at the gall of the ousted administration, which dared to confront FIFA, which some deemed reckless, even irresponsible. But, as months went by, this surprise turned to curiosity, then fascination, when it was became clear that “TTFA v. FIFA” was a test case whose implications went well beyond the fate of a specific administration or the right of Trinidad & Tobago’s national football team to take part in FIFA-sanctioned competitions. It had the potential to alter football governance as a whole. And FIFA knew it.

As Justice Gobin said: “in [FIFA’s] view, the decision to go to a local court [as TTFA had done in Trinidad & Tobago] jeopardised the overall global football governance structure”. When Josimar reached out to FIFA for comment after the judgment was delivered, the statement we received was very clear on that point: “The appointment of a normalization committee is not a matter to be decided by the local courts of an individual member association”, it read, “as to do so would fundamentally affect the structure of football governance [our italics] and the application of consistent, fair and transparent principles for all member associations.” (*)

Why? Because the key matter at hand was always going to be the extent to which FIFA could exert its authority on its Member Associations. For the first time, the idea that FIFA’s own statuses superseded local law was challenged in a High Court, and the High Court’s conclusion has been as clear-cut as they come. No, FIFA’s power did not extend that far. Yes, there were clear boundaries which even FIFA had to acknowledge and respect. And no, FIFA’s statuses could not override the primacy of legislation. Yes, Trinidad & Tobago had been a FIFA member since 1964. But the Trinidad & Tobago Football Association was a body corporate established by Act no.17 of 1982 by the Parliament of a sovereign Republic.

This meant that FIFA’s use of ‘normalisation’ and suspension of FAs could be considered illegal – at least in this case. But why not in others? After all, the TTFA is far from being the only FA to have been incorporated by an Act of Parliament. This also meant that the Court of Arbitration For Sport was not the only legitimate recourse for a member of FIFA which was involved in a dispute with the governing body.

To say otherwise would be to accept that FIFA could overrule an Act of Parliament; and to accept that would be to surrender national sovereignty. To punish the TTFA because it had dared to challenge FIFA in court could “only mean that FIFA [did] not recognise the Courts and the judicial systems in any of its 212 member states”, Gobin said. “If it is the case as FIFA continues to insist that it will not accept the jurisdiction of the Court of any member country, and that CAS is the only dispute resolution forum that it will recognise, […] then there is every danger that FIFA will become a law unto itself if it hasn’t already become one”.

Unhappy Prime Minister
What will happen now is still uncertain. TTFA’s victory at the High Court did not please everyone in Trinidad and Tobago, starting with the country’s Prime Minister, Dr Keith Rowley, who posted sarcastic comments on Facebook. “Another such victory and we shall be utterly ruined”, he quipped. “So now united TTFA has “won” and FIFA has lost. The matter is settled in local court. We are now free of the “colonial” FIFA. We, boys and girls, men and women, are free to play by ourselves and against ourselves because nobody will be allowed to play with or against us”. William Wallace, the president of United TTFA, the man who brought the case to the High Court, has been a controversial figurehead himself, and is by no means a hero to everyone. Some members of the TTFA board have tended their resignations, last of them Keith Look-Loy, until then one of the architects of the fight against FIFA, who has decided that, his job done, the time was right for him to say goodbye to football.

A general meeting of TTFA’s membership has been called for Sunday 25 October, at which the delegates will have to choose one path of action among many. TTFA could carry on defying FIFA and move on to have their case heard by CAS, for example. Or Wallace could be asked to put an end to his campaign, now that he’d been vindicated by the country’s High Court. Or Wallace and his supporters could be asked to let others take over the running of TTFA. It could even be that a request is made to the government to amend the 1982 Act which incorporated the TTFA, so that FIFA is no longer in breach of the country’s laws.

There is some appetite to carry on defying FIFA – also among the senior players of the Soca Warriors, as Josimar has learned. Even though fighting on would signify missing out on the 2021 Gold Cup, but it is more likely that a compromise with FIFA of some kind will be sought. No-one in Trinidad & Tobago wishes to see the nation’s men’s and women’s teams excluded from international competitions; and the financial situation of the TTFA is so dire that its only hope is for FIFA to unblock its funding.

Yet, somehow, even if a face-saving agreement is reached, it will not invalidate an unprecedented victory whose impact will be felt way beyond the Caribbean archipelago. As Look-Loy put it in his resignation statement, “Trinidad and Tobago has now set the stage for other countries to challenge FIFA’s arrogant and brutal approach to football governance”.

(*) Josimar was told by a former FIFA high-ranking administrator that John-Williams had played a key role in making a number of Caribbean FAs switch their allegiance from other candidates to Gianni Infantino in the run-up to the 2016 FIFA presidential elections, whom the source says had close to no support in that region prior to John-Williams’s intervention.

(*) FIFA’s full statement reads: “As stated recently, the suspension will only be lifted when the Trinidad and Tobago Football Association (TTFA) fully complies with its obligations as a member of FIFA, including recognising the legitimacy of the Court of Arbitration for Sport (CAS) as the forum for resolving this dispute and bringing its own statutes into line with the FIFA Statutes.

To be a member of FIFA and participate in international football TTFA, like any other member association, has to respect the rules of membership of FIFA.  That includes agreeing that disputes, such as the appointment of a normalization committee, are dealt with only by the CAS, which is the internationally recognized tribunal for the resolution of sports-related disputes. The CAS fairly applies the same uniform legal standards and principles to each dispute that it is asked to determine. The appointment of a normalization committee is not a matter to be decided by the local courts of an individual member association, as to do so would fundamentally affect the structure of football governance and the application of consistent, fair and transparent principles for all member associations.

FIFA has at all times been ready and willing to arbitrate this dispute with the TTFA at CAS, it has made this clear in its submissions, and has always acted in accordance with the rules of the CAS in this matter“.

Josimar also contacted Robert Hadad, the head of the normalisation committee appointed by FIFA, whom Justice Gobin said had “deliberately engaged in conduct that was calculated to subvert the adjudication of  [TTFA’s] claim”. Mr Hadad did not respond to our enquiries.