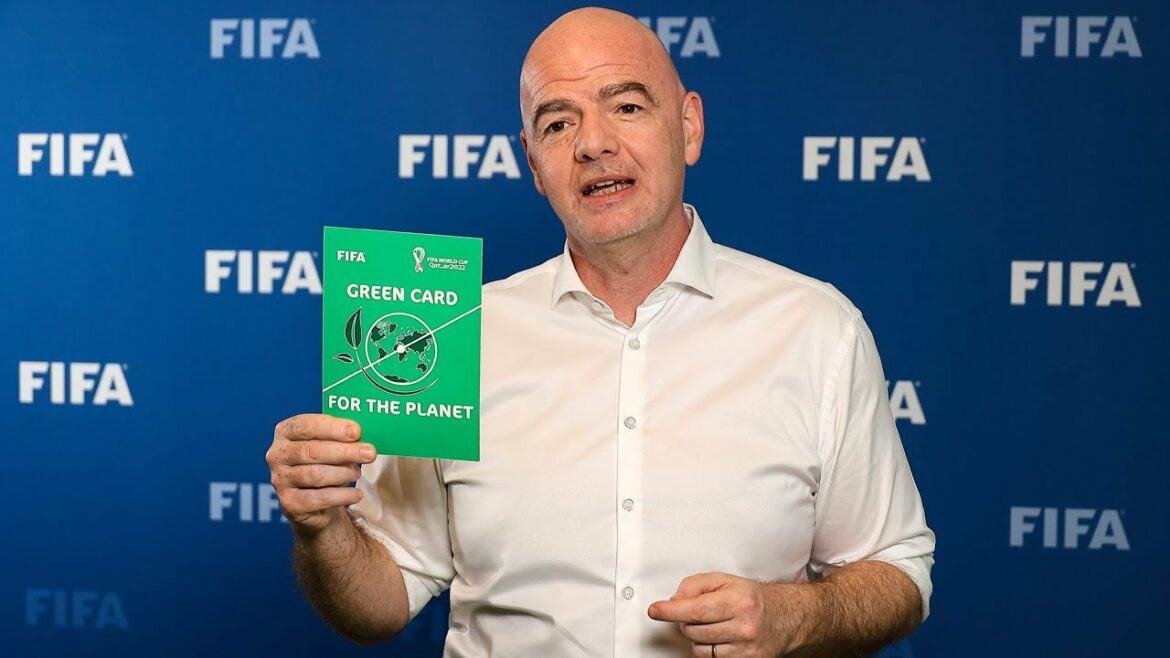 According to Fifa, Qatar 2022 is to be the ‘greenest of all World Cups’. But independent reports show that far from being the first carbon-neutral global sports competition in sports history, as promised by Fifa president Gianni Infantino, the forthcoming World Cup will be the dirtiest ever staged.

The World Cup in Qatar will at least double the carbon footprint of the 2014 and 2018 tournaments – with hardly any significant mitigation to offset its environmental impact.

5 June 2022, World Environment Day. In a short film posted on Fifa’s official YouTube channel, Gianni Infantino brandishes an oversized ‘green card’ stamped with the logos of Fifa and Qatar 2022 and reads from the autocue: “I’m asking everyone who loves football and who cares about the environment to raise FIifa’s Green Card for the Planet.”

Not many did. At the time of writing, five months later, Infantino’s appeal had been watched by a grand total of 591 people.

But does it matter? After all, the one thing that really matters is the message in itself, awkward as its presentation might have been; and the message was, in Infantino’s own words: “Fifa is playing its part, with our aim to make the Fifa World Cup Qatar 2022 carbon neutral.”

Sceptics immediately homed in on the strategically-placed ‘aim’, which could exonerate Infantino if the World Cup didn’t turn as green in the wash as hoped in the end. Yet, at least, Fifa was showing intent, as it had done when it had launched its ‘Climate Strategy’ at the United Nations Climate Change Conference (COP26) in November 2021. World football’s governing body was committed to the UN Convention on Climate Change’s Sports for Climate Action Framework, whose objective was to cut greenhouse gas emissions by half by 2030, to reach net zero a decade later. Fifa wanted the world to know that they meant business.

Back in June 2021, it had estimated that Qatar 2022 would produce 3,6 million tonnes of CO2 in all, a huge amount compared to previous editions of the tournament – as much as Chad, the Central African Republic and the Democratic Republic of Congo produce in a year in toto – but which could be alleviated by a number of initiatives which the Qatari organisers had signed up to. According to the Fifa report, Qatar had “pledged to mitigate and offset all of the tournament’s greenhouse gas emissions, while advancing low-carbon solutions in Qatar and the region.”

In the longer run, despite the huge carbon footprint of the event, which required building brand new air-conditioned stadiums as well as the infrastructure needed to welcome over a million fans for the duration of the tournament, Qatar 2022 would prove to be an environmental model for similar competitions to follow. So we were told.

Unfortunately for Fifa, the Qatari Supreme Committee and, more to the point, for the planet as a whole, it appears that those numbers and those projections have little to do with what will be – and already is, as the World Cup infrastructure is now in place – the true environmental legacy of Qatar 2022, which, according to environmental experts, is on course to become the dirtiest event ever staged in the history of sport.

White Elephants
The first holes in Fifa’s bold assertion of ‘carbon neutrality’ were punched by NGO Carbon Market Watch (*) in a report first published in May 2022, since updated, which meticulously unpicks the claims made by both football’s governing body and the Qatari organisers.

The first thing which caught the environmental analysts’ attention was the very small amount of greenhouse gas emissions which had been allocated by SouthPole, Fifa’s and the Supreme Committee’s chosen carbon finance consultancy, to the construction of new stadiums, of which seven have been purpose-built for the tournament: only 5.5 percent of the competition’s total emissions, a surprisingly low figure given the scale of the project.

Why was that? Looking into the consultancy’s numbers, Carbon Market Watch realised that they had been calculated by taking into account the estimated ‘life’ of those stadiums – not just the duration of the actual World Cup.

Working that way, not unlike a creative accountant spreading the cost of, say, the transfer of a player over the length of his contract, it was possible to amortise the emissions over…sixty years, as this is what Fifa estimates to be the ‘life expectancy’ of those stadiums. Yet those stadiums would actually be used for 70 days: the duration of the actual 2022 World Cup, plus that of the two Fifa Club World Cups which took place in Qatar in 2019 and 2020.

Moreover, based the figures which Fifa’s own consultancy had used to estimate the emissions generated by one particular new arena, Stadium 974, which is supposed to be dismantled and re-used after the World Cup, Carbon Market Watch found that the actual volume of emissions generated by the construction of the seven new structures would be ten times greater than Fifa’s figure of 206 kilo tons of CO2 equivalent.

Therefore, the validity of Fifa’s claims depended on whether those stadiums would, indeed, continue to be used after the World Cup Big Top had been taken down or not – a big ‘if’, given what had happened in South Africa, Brazil and Russia in the three previous editions of the tournament, whose legacy had been collections of white elephants which were barely used, if at all. Could a country the size of Connecticut, with a league whose clubs attract attendances fewer than 10,000 on average – and that is being generous, in absence of reliable figures – really have the use of arenas built to welcome four to eight times that number?

The answer to that question is: probably not. In fact, the Qataris themselves indicated that only two of the seven new stadiums, Al Janoub and Ahmad Bin Ali, would become the home of football clubs, namely Al Wakrah and Al Rayyan, both of whom will struggle to fill them, even with a capacity reduced by half. One would be assigned to the Qatari women’s football team (which they don’t have), and the others would be transformed into a variety of parks, recreation, sports and leisure facilities and, in the case of Al Thumama, an ‘energy innovations research facility’. This transformation, should it happen, would also trigger carbon emissions, which do not appear to have been taken into account by Fifa’s consultants.

As to Stadium 974, the much-trumpeted ‘re-usable’ stadium, no-one yet knows how and where, or when, it will be ‘re-used’. If ever.

Moreover, functioning stadiums are energy-hungry – especially when they use air cooling technology, as is the case here – and, in Qatar, 99 percent of electricity is generated by fossil-fuelled power stations.

Yet Fifa’s estimate of the 2022 World Cup carbon footprint does not include the energy consumption of the new stadiums beyond 25 June 2023. But were these stadiums not supposed to have a lifespan of sixty years? So why use this figure in one case – when it allows to significantly lower the volume of emissions generated by the World Cup – and not the other – when it has the opposite effect?

Red Herrings
Yet, should the right measures be taken to alleviate the negative environmental impact of the tournament, could Fifa and the Qatari organisers achieve their aim of staging a ‘carbon neutral’ competition?

But here again, looked at more closely, their claims do not stand up to scrutiny.

Take the ‘tree and turf farm’ which is being created in the Qatari desert, for example, a huge nursery which is presented as the largest of its kind in the world, and which, when completed, will cover 42.5 hectares. The problem, here, is that the ‘thousands of tonnes’ of CO2 and other greenhouse gases which the Qataris say will be absorbed each year do not represent the ‘climate benefit’ which is advertised. These trees and plants would need to store CO2 for centuries before they could be said to mitigate the impact of the World Cup; and they won’t. Furthermore, given Qatar’s unforgiving, arid climate, they’ll need constant watering and care, activities which, in themselves, will also require energy and will produce significant emissions.

Much more importantly, there are also serious questions about the validity of the ‘carbon credits’ which Fifa and Qatar say will contribute to offset the emissions caused by the tournament. In theory, should the figure of 3.6 million tonnes and CO2 and other GHGs be accepted – some environmental experts consider it a significant under-estimation – the competition’s organisers would have to purchase 3.6 million credits to ‘break even’, and the way they’ve gone about achieving this objective casts uncomfortable doubts about the whole initiative. Said more crudely, the whole set-up appears to be one giant red herring.

To start with, to make good on their promise, the Supreme Committee entered into a partnership with an entity called GORD, the Gulf Organisation for Research and Development – which happens to be owned by Qatari Diar, the real estate arm of QIA, the emirate’s sovereign wealth fund. Independent it certainly is not.

GORD then created a ‘Global Carbon Council’ (GCC), which was tasked to purchase at least half of the 3.6 million carbon credits needed and certify the sustainability of all World Cup projects, including the construction of stadiums.

The GCC announced big plans: at one point, they claimed that they had 238 projects in the pipeline; but that ambition looks nowhere near to being fulfilled. At the time of writing, only six such projects had been registered, two of them in Turkey and in Serbia, one in Oman and one in India. Those projects were also overwhelmingly linked to the production of renewable energy, the type of initiatives which truly independent, established carbon markets standards such as the Verified Carbon Standard and the Gold Standard simply refuse to consider worthy of registration – as they would be going ahead anyway, and do not constitute proper mitigation in their view.

Not even enough to offset the emissions generated by the 168 air shuttles which, each day, will ferry fans who were incapable of finding accommodation in Qatar itself from neighbouring countries such as Oman, Kuwait and the UAE.

And certainly not enough to offset another factor which is usually ignored, paradoxically because it should be visible to us all: the emissions generated by ‘spectating’ the event.

Televisions too are energy-hungry, and when over three billion humans switch theirs on, as, according to Fifa’s estimates, was the case for Russia 2018, the result is another colossal amount of CO2 and other GHGs sent into the atmosphere: according to the French environmental consultancy Greenly, a minimum of another one million tonnes of CO2 and other GHGs – perhaps even two – which should be added to the carbon footprint of this World Cup, on its way to become the dirtiest sporting event in history.