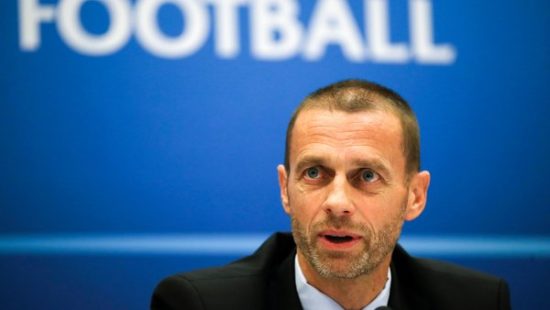 A Slovenian TV show that included criticism of UEFA president Aleksander Čeferin was once again blocked on YouTube. While UEFA says that they had nothing to do with the blocking, YouTube tells Josimar it was UEFA who initiated it.
By Pål Ødegård

As earlier reported by Josimar, two weeks ago the Slovenian TV show VV Faktor, a blend between a documentary and panel debate, was blocked on YouTube. Viewers of the online video channel were met with a message that UEFA had blocked it for copyright violations. UEFA never answered questions from Josimar on why exactly they had blocked the show, which contained a few seconds of the Slovenian national team’s World Cup qualifying match against Lithuania. TV3, the channel running VV Faktor, claimed they had the right to show the footage, as they have an agreement with the Slovenian national broadcaster, who have the rights to show the matches of the national team. TV3 believed the reason for getting blocked did not have anything to do with copyright violations, but rather that the programme included criticism of UEFA president Aleksander Čeferin.

Last week, VV Faktor ran another of their weekly shows. This time it was dedicated to what the hosts regarded as censorship from UEFA, along with Čeferin’s short cuts to power as president of the Slovenian federation back in 2011, something Josimar reported last year as he was elected UEFA president.

But, again, if you wanted to watch the show on YouTube (it was aired on Slovenian TV the night before it was published on YouTube), a message appeared telling viewers it had been blocked by UEFA due to copyright infringement.

UEFA’s feeble response
This time UEFA answered Josimar’s questions. Or sort of. We asked UEFA the following questions:
1. Last week, UEFA again blocked a panel show VV Faktor of the Slovenian TV channel TV3 on Youtube. Having seen the videos used in the show, it was hard to deduct any of it violated copyright as it says on Youtube. Can you clarify specifically which segments did this?
2. Do you notify TV3 when you block their programs?
3. Like the earlier show you blocked, this particular show also had UEFA president Aleksander Čeferin as a topic. Was it blocked because it criticized him?
4. Have you blocked other shows over similar issues/violations? If so, which ones?,
UEFA had this reply for all the above questions:

“YouTube’s content ID system for copyright infringement screens every video posted on its platform and automatically blocks a video when it contains material, such as match footage – which is reserved exclusively to UEFA broadcast partners – as the publishing of such content by unauthorised parties constitutes a copyright infringement. Therefore these videos are automatically blocked by YouTube without UEFA’s intervention.”

This statement contradicts what a representative from Youtube told Josimar last week. Charlotte Caroline Ekholt, communications manager for Google Norway, couldn’t comment on this specific case, but stated that:
“When a content owner inform us about a video that violates their copyright, we remove the content immediately according to regulations. Youtube’s Content ID technology gives the content owners control of their material on Youtube. If a user is of the opinion that their video has been removed by a mistake, they can challenge the requirements of Content ID”.

In other words, it’s UEFA that notify YouTube whether to remove a video or not, even if the monitoring system is delivered by YouTube.

VV Faktor used content from three other Youtube videos in their latest show. One shows the UEFA president at a political rally in Ljubljana, while in another we see an interview with Samantha Tina Lovse, the club president of the Slovenian futsal club KMN Svea Lesna Litaja. Lovse told Josimar last year that Čeferin had done consulting work for the club, but that he never had been a board member, despite the fact that he appeared on their web site as one, and used this to justify relevant experience to be eligible to stand for election as president for the Slovenian FA.