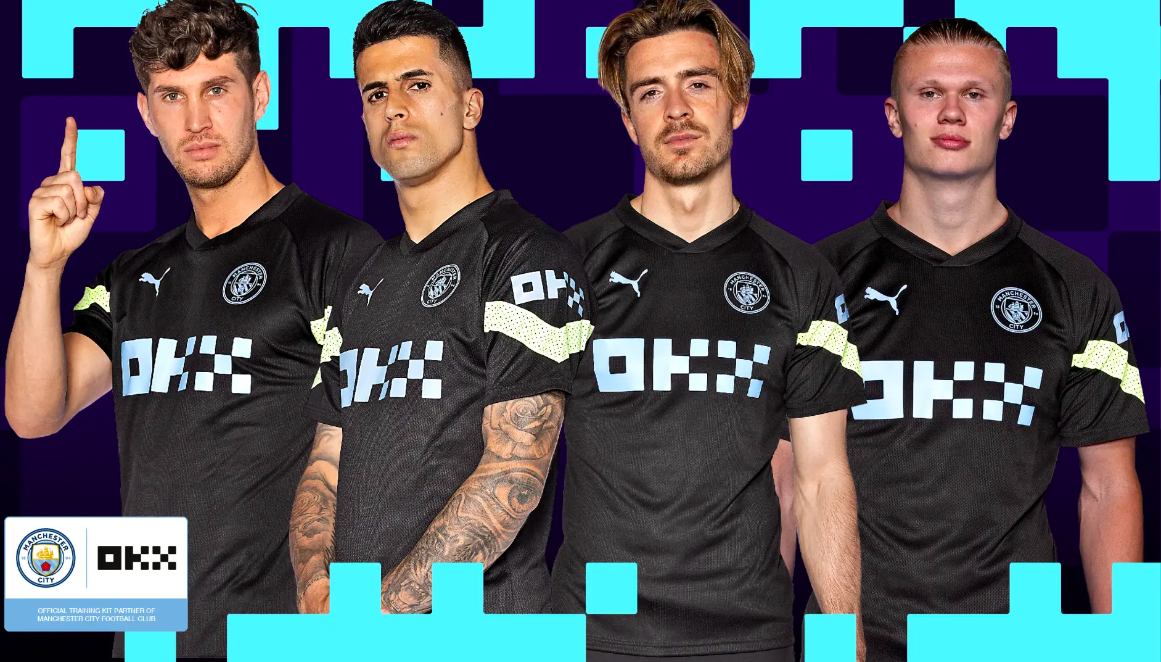 Manchester City’s new training kit sponsor, cryptocurrency exchange OKX, is under investigation in Canada for “violating securities law” and “failing to comply with the registration and prospectus requirements under Ontario securities law”, Josimar can reveal.

Only a matter of days after announcing that they had made opaque online bookmaker 8Xbet their “official Asian betting partner’ (Josimar’s investigation into 8Xbet can be read here), Manchester City closed a sponsorship deal with OKX, one of the world’s leading cryptocurrency and derivatives exchanges, which industry sources say will add 20 million US dollars to the club’s income in 2022-23. OKX had been Manchester City’s “Official Cryptocurrency Exchange Partner” since March of this year already.

OKX, formerly OKex (*), was founded in 2017 by Chinese entrepreneur Mingxing “Star” Xu, and, after relocating from Malta, is currently headquartered in the Seychelles after being prohibited to operate in mainland China in the autumn of 2021, following a blanket ban on companies dealing crypto assets by Xi Jingping’s government. OKX claims to be “the world’s second largest crypto exchange”.

The Ontario Securities Commission confirmed to Josimar that Aux Cayes Fintech Co. Ltd, the Mahé-based company which controls OKX, was the subject of proceedings at the Capital Markets Tribunal of the province of Ontario. The main allegations are that OKX had “engaged […] in the business of trading in securities without the necessary registration” and in “activity which is contrary to the public interest”. In practice, this means that Manchester City’s new crypto partner, which is also banned from operating in the USA, had opened trading accounts for Ontario residents when it was illegal for the company to do so.

This is not the first time that OKX is embroiled in controversy or, indeed, accusations of illegal activities.

According to reports in Chinese media, on 24 February 2018, the crypto exchange platform was the subject of an official criminal investigation by the Dongguan Public Security Bureau on suspicion of “illegal futures trading” and “fraud”. Its founder, ‘Star’ Xu was arrested and held for questioning on at least two occasions, once in Shanghai, in September 2018, and the second time in October 2020, when his absence coincided with OKX suspending withdrawals from their platform.

The company explained that an “unnamed holder” of the keys to the crypto assets had been uncontactable, and, therefore, unable to validate the transactions on the company’s blockchain, effectively stopping the flow of trades on the platform. Xu, who said he’d been cleared of all accusations, resurfaced a month later, explaining that he’d been involved in a “complicated legal case” about a company takeover which had happened years previously. OKX resumed its operations almost immediately after his reappearance.

“We are unable to comment”
The synchronicity of these events – Xu “helping the authorities with their inquiries” and the suspension, then resumption of trading on the OKX platform when he’d been released – casts doubts on the OKX’s assertion that they were a “separate entity” from the Xu-controlled OK Group “since 2017”, and that “Star” had “not been in any kind of operation in OKX”. No further explanation of the reasons why OKX suspended transactions on its platform was given, even though they admitted that a “key holder” had been “assisting the authorities” and  had “now returned to his normal business functions.”

To quote from a company statement which was released at the time, “OKX maintains all details about private key holders confidential, as such, we are unable to comment on this neither can we provide any comment on Star Xu”. Why OKX would want to dissociate themselves from their founder is unclear, unless he remains a key figure in the organisation, which is suspected to carry on operating in China through proxies despite announcing their withdrawal from that market in December 2021.

According to an investigation by Caixin.com, “although the three major platforms no longer have offices in mainland China [namely, Huobi, Binance and OKX], and the founder teams have all moved overseas, there are still a large number of engineers and other R&D personnel working in mainland China, who sign contracts with third-party outsourcing companies, as outsourcers working from home”.

OKX’s modus operandi has also attracted the attention of independent crypto-industry analyst Sylvain Ribes, who analysed publicly available data to determine the volume of actual transactions on the platform, and concluded that their own figures were “overstated by as much as 95%”.

Ribes concentrated on what is called “slippage” in the notoriously lingo-obsessed crypto industry. “Slippage” is “the percentage change between the observed mid-spread price and the lowest price [the trader] has to consent to to sell the asset”. In other words: how low are you prepared to go when you want to trade an asset? The greater the volume of transactions, the more “slippage” should decrease – the law of averages ensures that wild peaks and troughs will disappear as “normal”, market-price trades occur.

But, according to Ribes, this was not what was happening in OKX’s case, quite the opposite in fact. OKX trading figures showed “slippage” that made no sense – unless the transactions never took place to start with. “A suffocating majority of OKX volume is fake”, he concluded, “in a laughably obvious and artificial way”. As a matter of fact, all of the graphs Ribes drew were consistent with an estimated proportion of “fake” volume of transactions of 93.6 percent.

As this market is not regulated, should Ribes be right in his analysis, this kind of manipulation is not illegal per se. The impact on potential investors is real, however. Those investors will be encouraged to trade on a platform which is seen to be one of the most popular in its market; fake volume in a specific cryptocurrency can make it more appealing and cause over-valuation, with aggravated consequences when the said cryptocurrency falls or, as has been the case since Novembre 2021, crashes on the markets.

Another concern is OKX’s lack of a comprehensive so-called ‘KYC’ (‘Know Your Customer’) policy. ‘Unverified accounts’ can withdraw up to 10 BTC –  210,000 US dollars at the time of writing – per day without their beneficiary having to present any proof of identity. All such transactions will therefore remain entirely anonymous and, therefore, untraceable.

As said previously, none of the above is illegal in what remains an overwhelmingly unregulated industry, regardless of how objectionable some of its practices will be to many; but the same cannot be said of what OKX is currently being investigated for in Canada.

A procedural hearing is scheduled to take place on 22 August, which will be followed by a “merits” hearing in September, at which the tribunal will decide whether the allegations made against OKX warrant further proceedings.

OKX and Manchester City have been contacted for comment. We have not received any replies.

(*) For reasons of clarity, “OKex” will be referred to as “OKX” in this piece, as the two entities are the same.